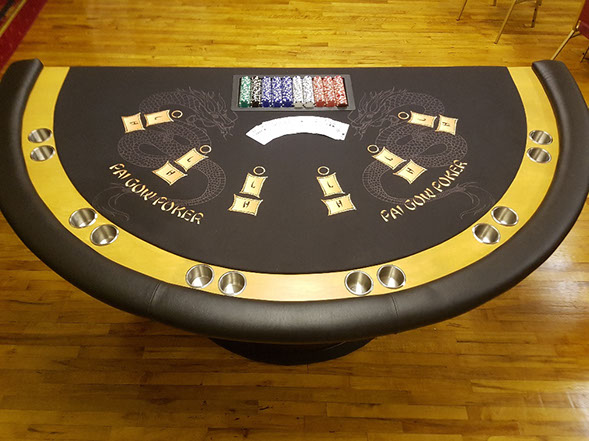 HOW TO PLAY PAI GOW POKER

52-card deck plus one Joker. The rules are fairly simple.

After making a bet, each player is dealt seven cards and must make two

The five-card hand is often called “behind”, or the “bottom”, “high”, or

When forming your two hands from your seven cards, the five-card hand

must be higher than the two-card hand. In other words, if you are dealt

Additionally, having the joker in the deck introduces the possibility of five

of a kind, which beats a straight flush.

The best two-card hands are pairs and then simply high cards. Straights

and flushes don't matter in the two-card hand. The worst possible 2-card

The Joker in Pai Gow Poker

Instead of acting as a whatever-card-you-want wild card, the Joker in Pai

Gow is called a “bug”. It acts as an ace unless it can be used to fill out a

straight or a flush. This also means that you can have five aces, which is

Once players have set their two poker hands, they place their hands in

both hands against the “Banker”. The banker is the Dealer.

Each player compares his hands to the banker's hands. If both the player's

hands beat the banker's, the player wins. If one of the player's hands beats

the banker's hands but not the other, it's considered a push or draw and the

player takes back his money. If the banker's hands beat

We're based in Portstewart, Northern Ireland
We work with clients from all over.  Get in touch with us!